The Last Lecture by Randy Pausch 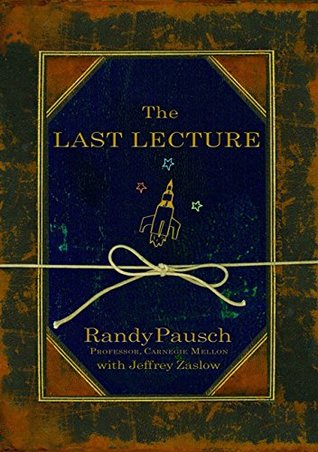 A lot of professors give talks titled ‘The Last Lecture’. Professors are asked to consider their demise and to ruminate on what matters most to them: What wisdom would we impart to the world if we knew it was our last chance? If we had to vanish tomorrow, what would we want as our legacy?

When Randy Pausch, a computer science professor at Carnegie Mellon, was asked to give such a lecture, he didn’t have to imagine it as his last, since he had recently been diagnosed with terminal cancer. But the lecture he gave, ‘Really Achieving Your Childhood Dreams’, wasn’t about dying. It was about the importance of overcoming obstacles, of enabling the dreams of others, of seizing every moment (because time is all you have and you may find one day that you have less than you think). It was a summation of everything Randy had come to believe. It was about living.

In this book, Randy Pausch has combined the humour, inspiration, and intelligence that made his lecture such a phenomenon and given it an indelible form. It is a book that will be shared for generations to come.

I read this book in April while my husband was dying. This was part of a color coded TBR project I was working on, but have since given up on. I still plan to read all of the books though.

I first read this book when it was published in 2008. I remember enjoying it and I added it to the color coded black TBR in September of 2018 when I crafted several of these lists at once that would be tackled over the coming year. When we found out my husband has terminal brain cancer and would be dying soon he talked to a friend of his that also has terminal brain cancer, though a less aggressive form. The friend suggested he read this book and when my husband asked me to try and get it from the library for him I was able to pull it off the shelf and hand it to him. My black TBR had posted the day before. It was kismet. The timing was too perfect all around. I had forgotten what the book was really about. As of the reading of this book (April 2019) my husband hasn’t picked it up yet, but I began it the day after my husband brought it to my attention again. This book is based on a speech that the author gave to help leave a legacy for his three small children. He was diagnosed with pancreatic cancer and given only a few months to live. The book is about how he wants his children to remember him, his dreams for his children and wife, how he is handling knowing his death is imminent. It all hits way too close to home for me. I cried through most of it and hope my husband will pick it up to read soon. (He never did.) It was a very powerful book that left me a lot to think about.