The Twin by Gerbrand Bakker 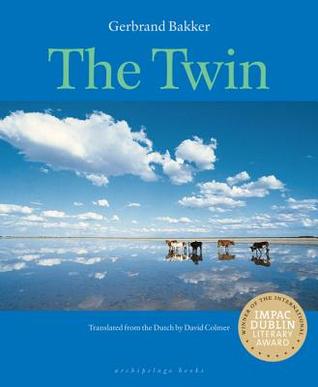 When Henk’s twin brother dies in a car accident, Helmer is obliged to return to the small family farm. He resigns himself to taking over his brother’s role and spending the rest of his days ‘with his head under a cow’.

After his old, worn-out father has been transferred upstairs, Helmer sets about furnishing the rest of the house according to his own minimal preferences. ‘A double bed and a duvet’, advises Ada, who lives next door, with a sly look. Then Riet appears, the woman once engaged to marry his twin. Could Riet and her son live with him for a while, on the farm?

The Twin is an ode to the platteland, the flat and bleak Dutch countryside with its ditches and its cows and its endless grey skies. Ostensibly a novel about the countryside, as seen through the eyes of a farmer, The Twin is, in the end, about the possibility or impossibility of taking life into one’s own hands. It chronicles a way of life which has resisted modernity, is culturally apart, and yet riven with a kind of romantic longing.

I read this book in February while my husband was dying. This was part of a color coded TBR project I was working on, but have since given up on. I still plan to read all of the books though.

The Twin by Gerbrand Bakker is about Helmer, a miserable man who was forced to take over the family farm when his twin brother died. I very much disliked him. I saw glimpses of why he hated his father so, the abuse especially, and making him leave college to work on the farm, but I can’t see why he would starve and isolate and torture the old man. He should have sent him to a home of some sort where someone else would care for him. I didn’t like his father either though. I didn’t like a single character in this book. If not for the color coded tbr I would probably have DNFed it about 100 pages in. By page 150 I could see a few glimpses of his humanity in the way he told his father to make sure he turns over to not get bed sores and offering him some eel to eat, but there was still cruelty in there as well. Once young Henk came to visit there was more kindness on Helmer’s part thrown around for everyone in the story, but he was just a very weird person the whole time. The ending was unsatisfying for me. The language was beautiful, but the story was meandering and filled with people I didn’t like and a story line I just didn’t care about.

One thought on “Recent Reads- The Twin”