From Scratch: A Memoir or Love, Sicily, and Finding Home by Tembi Locke 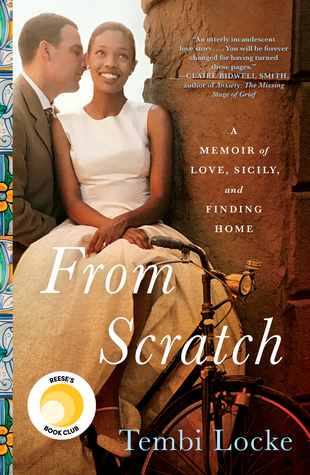 It was love at first sight when Tembi met professional chef, Saro, on a street in Florence. There was just one problem: Saro’s traditional Sicilian family did not approve of him marrying a black American woman, an actress no less. However, the couple, heartbroken but undeterred, forges on. They build a happy life in Los Angeles, with fulfilling careers, deep friendships and the love of their lives: a baby girl they adopt at birth. Eventually, they reconcile with Saro’s family just as he faces a formidable cancer that will consume all their dreams.

From Scratch chronicles three summers Tembi spends in Sicily with her daughter, Zoela, as she begins to piece together a life without her husband in his tiny hometown hamlet of farmers. Where once Tembi was estranged from Saro’s family and his origins, now she finds solace and nourishment—literally and spiritually—at her mother in law’s table. In the Sicilian countryside, she discovers the healing gifts of simple fresh food, the embrace of a close knit community, and timeless traditions and wisdom that light a path forward. All along the way she reflects on her and Saro’s incredible romance—an indelible love story that leaps off the pages.

This book was generously gifted to me by a follower. Thank you so much Kristin!

This book touched me in so many ways. I didn’t have nearly as long with My Jason as Tembi had with Saro, but I also didn’t have to watch him battle cancer for nearly as long. The author’s husband dies of cancer when she was 42 and left behind her and their 7 year old daughter. We follow her through three summers spent in Sicily where her late husband was from. Seeing her healing journey though those three summers, spaced so far apart, made the length, difficulty, and hopefulness of the grief process show very well.

I annotated this book as I went along and I am happy to say that, though most of my annotations were sad, there were nearly as many that I would label as hopeful or happy. It was a wonderfully balanced book that I could relate to on so many levels and left me with an overwhelming feeling of hope when it concluded.

I am grateful to have read this book.