The Boy Who Knew Too Much by Cathy Byrd 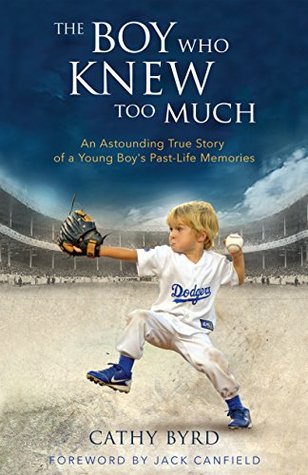 Anything can happen in baseball.

At the tender age of two, baseball prodigy Christian Haupt began sharing vivid memories of being a baseball player in the 1920s and ’30s. From riding cross-country on trains, to his fierce rivalry with Babe Ruth, Christian described historical facts about the life of American hero and baseball legend Lou Gehrig that he could not have possibly known at the time.

Distraught by her son’s uncanny revelations, Christian’s mother, Cathy, embarked on a sacred journey of discovery that would shake her beliefs to the core and forever change her views on life and death.

In this compelling and heartwarming memoir, Cathy Byrd shares her remarkable experiences, the lessons she learned as she searched to find answers to this great mystery, and a story of healing in the lives of these intertwined souls.

The Boy Who Knew Too Much will inspire even the greatest skeptics to consider the possibility that love never dies.

Why did I read a book about baseball when I don’t like sports? Why did I read a book about reincarnation when I don’t believe in anything spiritual? I don’t know. I don’t remember where I heard about this book or what made me add it to my library holds list. But I read it and it was a compelling read, though I’m not converted to being either a baseball lover or a reincarnation believer after finishing it.

It doesn’t feel okay to criticize characters in a non-fiction book because those characters are real people. But I can’t accurately explain why I hated this book without talking about the author, who is also the mother in this story. A big struggle I had with this book was the way the wife behaved towards her husband and daughter. She kept secrets from her husband and went places to do spiritual things that were against their family beliefs without telling him because she knew it would make him uncomfortable. She repeatedly left him out of decisions or went against his wishes without further conversation when making choices for their children. She constantly dragged her daughter along on ‘vacations’ that were only of interest to her and her son. The first thing I did after finishing this book was to try and find out if they were divorced at this point because honestly I could never be married to someone that deceitful.

Other issues I had with the book were that the author seemed very wishy washy. She was often saying she believed her son and wanted him to talk more about his past life and then in the next paragraph she would say she was relived that he seemed to be growing out of it. I’m sure this is accurate to her feelings at the time, but made her seem unreliable.

She was wishy washy in her faith too. She repeatedly said I can’t do that or believe that because I’m a Christian, but then ran out and did whatever she claimed she wasn’t allowed to a paragraph before. Such a frustrating character to follow.

She lied to everybody she encountered on her quest. She repeatedly said I hated to lie to him but I couldn’t say the truth and risk scaring him away.

And one of the biggest frustrations for me was when she spoke for several chapters about a picture she was trying to find and then she says she finally found it and was so relieved to have done so, but that picture we spent so much time in the book hunting for and talking about we didn’t get to see in the pages of photos that were included even though we were shown another picture from that same photo finding trip.

This wasn’t even really a story about her son. It started that way, but quickly became about her and the past life she dreamed up for herself and as many famous baseball names she could squeeze on to a page.

Some of this could be explained by her lack of experience as a writer. And your opinion might be different because this book does have a four star rating on Goodreads overall, but many people in the reviews also agree with my complaints about the book.

I started this book enjoying the story even though I didn’t believe it as fact. I was looking at a four star rating around a quarter of the way through but as the pages kept flipping my rating got lower and lower. I was going to give it two stars by the end because it was at least an interesting story, but the final two chapters were so heavy handed with the religious lesson explaining I took it all the way down to one star. If those lessons she was spewing at the reader weren’t so entirely hypocritical of everything she had chosen to do in the previous 200 pages it wouldn’t have made me nearly as angry. I wish I was a reader that DNFed books because I should have given up on this one long before I reached the end.

And the most important question for a reader of this book: Do I believe Christian and his mother are reincarnated from Lou Gerigh and his mother? No.

5 thoughts on “Recent Read: The Boy Who Knew Too Much”